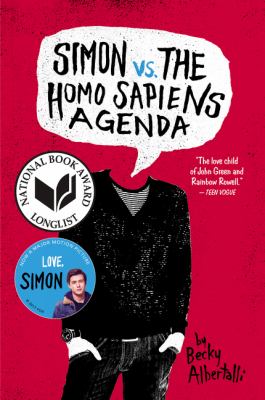 Buy now at ThriftBooks.com – Currently $10.33 for paperback which means you’ll get free shipping! Click the cover above for more information!

Simon vs. the Homo Sapiens Agenda

Sixteen-year-old and not-so-openly gay Simon Spier prefers to save his drama for the school musical. But when an email falls into the wrong hands, his secret is at risk of being thrust into the spotlight. Now Simon is actually being blackmailed: if he doesn’t play wingman for class clown Martin, his sexual identity will become everyone’s business. Worse, the privacy of Blue, the pen name of the boy he’s been emailing, will be compromised.

With some messy dynamics emerging in his once tight-knit group of friends, and his email correspondence with Blue growing more flirtatious every day, Simon’s junior year has suddenly gotten all kinds of complicated. Now, change-averse Simon has to find a way to step out of his comfort zone before he’s pushed out—without alienating his friends, compromising himself, or fumbling a shot at happiness with the most confusing, adorable guy he’s never met.

Sigh…. all the feels!! I adored everything about this book. The characters reminded me of all of my awkwardness in high school and how close-knit my friends and I were. Sadly, kids these days have to worry about way more things than I had to back in high school. Fortunately, social media was not a concern when I was growing up, so if you had a secret that you were worried about leaking, you didn’t have to worry about it being blasted all over the internet for the entire world and more importantly, your entire school to see.

This book touches on so many important issues: family dynamic, social acceptance, overcoming your fears, the list goes on. I couldn’t help but cringe at some parts such as Simon’s friend Leah very obviously crushing on their other friend, Nick. Meanwhile Nick is crushing on Abby. I feel like this is such a typical high school thing that we can all

The growing relationship between Simon and Blue is adorable. They exchange emails everyday and are able to tell each other things that they can’t even talk to their closest friends or family about. Both boys have not come out yet so they are relieved to have someone who is going through the same thing as them. The more Simon falls for the Blue though, the more he wants to meet him in person. Blue is not ready for that next step though, even though they attend the same school. Simon slowly drives himself insane trying to figure out who Blue is, all while dealing with being blackmailed, and navigating his family, and the love triangle his friends are in.

A cute YA rom-com which characters that you will fall in love with. The book is half told via email correspondence and half narrated by Simon and he is such a laid-back character that halfway through the book you are wishing he could be your BFF. I love that Blue remains a mystery throughout most of the book and Becky Albertalli does a fantastic job of keeping you guessing who Blue is until the very end. I at one point was convinced it might be one of Simon’s friends just screwing with him and was so happy I was wrong. What kind of messed up book would that be when obviously this is a book about acceptance and overcoming society norms.

If you haven’t read this yet, what are you waiting for??

Why is straight the default? Everyone should have to declare one way or another, and it shouldn’t be this big awkward thing whether you’re straight, gay, bi, or whatever. I’m just saying.

People really are like house with vast rooms and tiny windows. And maybe it’s a good thing, the way we never stop surprising each other.

The way I feel about him is like a heartbeat — soft and persistent, underlying everything.

Sometimes it seems like everyone knows who I am except me.

There are some socks that shouldn’t be washed by your mom.

The last one literally had my laughing out loud 😀

Becky Albertalli is the author of the acclaimed novels Simon vs. the Homo Sapiens Agenda (film: Love, Simon), The Upside of Unrequited, and Leah on the Offbeat. She is also the co-author of What If It’s Us with Adam Silvera. A former clinical psychologist who specialized in working with children and teens, Becky lives with her family in Atlanta. You can visit her online at www.beckyalbertalli.com.